5 Reasons You Should Be Drinking Beer & Eating Chocolate

5 Reasons You Should Be Drinking Beer & Eating Chocolate 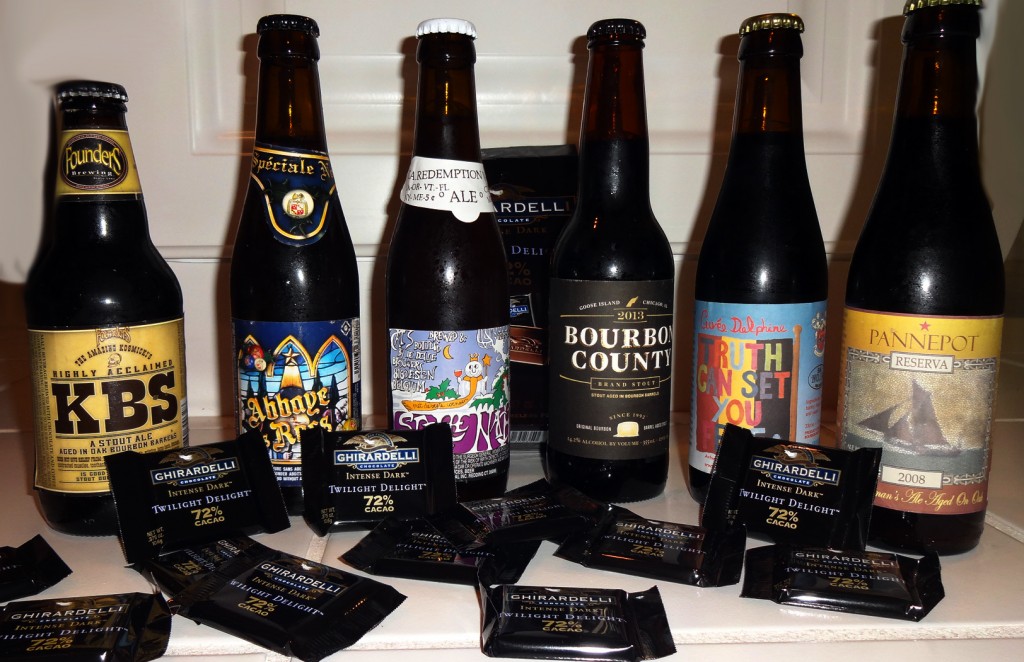 Research studies from around the world, including one from Harvard University, have shown that both chocolate and beer can help reduce the risk of heart disease.  This is due to various factors, one noteworthy factor being that consumption of both of these products help increase HDL, (the good kind of cholesterol) and decreases LDL (bad cholesterol).

Additional studies show that beer contains a good amount of antioxidants. (In a nutshell, antioxidants are molecules which help prevent cell damage)  While red wine has long been touted as having amazing antioxidant value, beer has not been given its fair share of the spotlight…   Both hops and malted barley, two of the primary ingredients from which beer is made, contain antioxidants. With malt, additional antioxidants are formed when the barley is roasted at higher temperatures.  This roasting of the malt gives the beer a darker color; so darker beers tend to have greater antioxidant value.

Our tasty friends also have another thing in common, they are both chock full of minerals.  Good quality dark chocolate, we are talking at least 65-70% cocoa, contains a decent amount of minerals, such as iron, manganese, copper & magnesium.  Beer is also vitamin rich, especially with B vitamins, and it also contains magnesium, potassium, biotin, selenium and even vitamin C.  These vitamins and minerals can aid in protecting your body from a host of evil health issues, from strokes to anemia.

While Beer Shampoo and soap or chocolate facials may help you look gorgeous from the outside in, a study done at Tufts University indicated that the silicon found in beer (not silicone!) could help protect against osteoporosis because it helps prevent demineralization of bones.

Meanwhile, the flavonoids in chocolate can help reduce skin damage from sun exposure.  A study was done at the Institute for Experimental Dermatology in Germany which studied the results of skin exposure to UV rays in two groups of women who had been drinking flavanol cocoa powder (high flavanol vs low flavanol levels)mixed with water for 12 weeks.  The results showed that the high flavanol group had much less erythema, less roughness of the skin and had an increase in blood flow, skin thickness, density and hydration. These results, suggested the study, can translate to a cosmetically improved appearance. Move over Botox- Cocoa is in the house!

So, chocolate can make you look good, but what about feel good?

We have all heard that people who are heartbroken should eat chocolate, and truth is, it could actually be helpful, since our friend dark chocolate helps boost both serotonin levels and endorphin levels.  Serotonin is a chemical in your brain which works as an anti-depressant.  Endorphins are your body’s natural version of morphine, so the heck with the jerk who tried to break your heart! Armed with chocolate, you are an even happier camper without them!

Does beer offer happy brain chemicals as well? Some really interesting findings from a study published in the journal Neuropsychopharmacology (can you say that 3 times fast?) seem to indicate so.  Subjects were served ½ an ounce of beer slowly- over 15 minutes time in order to not induce any intoxication.  All of them, within minutes showed increased amounts of dopamine being released in their brain.(they were monitored by a PET scanner.)  Dopamine functions as a neurotransmitter which affects the brain in a variety of ways.  One of Dopamine’s jobs is to help control the brain’s reward and pleasure centers.

And like chocolate, light to moderate beer consumption has been shown to trigger release of endorphins, which will make you feel good. However, overindulging can lead to depression, so remember to be wary of “too much of a good thing…”

5. Chocolate and Beer- Warriors Against Diabetes?

An interesting study posted on the website for the Harvard School for Public Health revealed that moderate intake of alcohol, i.e. 1-2 12 oz beers/day, decreases the risk of Type II diabetes.

A number of studies are revealing that consuming high levels of a specific flavanol, called Oligomeric PC which is found in foods like unprocessed dark chocolate, appears to be linked to reducing the incidence of type 2 diabetes*

Average recommended amounts for these goodies?

The studies and information I researched varied, but seemed like 1-2 12oz beers a day for guys, 1 for women was pretty much a standard suggestion.  The chocolate was a little harder to pin down, depending on the percentage of cacao and the amount of flavonoids, and what you were trying to achieve.  Suggested amounts varied from 6.7 grams to 1 ounce per day. However, big cautions here were that the dark chocolate needed to be about 70% or more and of high quality; and too much cacao, especially with added sugar, can be as bad for you in as many ways as it is good for you…  So best advice, enjoy… in moderation.

Disclaimer: I am not prescribing, I’m just describing.

The information in this article is provided for entertainment and informational purposes only. It is not intended as a substitute for medical or professional nutritional advice. Please consult your doctor or nutritionist if you are considering utilizing chocolate and/or beer as part of your health/wellness program

*Remember these studies show that beer may lower your risk of getting type II diabetes, however if you already have type II diabetes you should consult your doctor and follow this advice from the American Diabetes Association when you do indulge.

Join us for some amazing beer and chocolate pairings during our Saint Augustine, FL Beer Safari Weekend.  We’ll be tasting some delicious chocolates right at the source and pairing them with some great craft beers during our private tour and tasting event at Whetstone Chocolates.