By Ruth Berman, CEO and BBB (Brains Beyond the Beer) Bon Beer Voyage 2/16

Our September 2015 article, 5 Reasons Why Belgium is the Ultimate Beer Travel Destination, discussed why Belgium should be on the bucket list for all die-hard Beer travelers.  However, if you are still not convinced that Beer Appreciation is taken to a whole new level by our friends in Belgium, here are a few more things to consider:

In 2012 the city of Brussels requested that an event be created that would be staged in Belgium as a vehicle to promote the global beer industry from a country that is internationally renowned for its excellence in beer. This event is the Brussels Beer Challenge. Now entering its 5th year, it has been held in various cities in Belgium.

The organizers of the BBC (Brussels Beer Challenge) come with extensive backgrounds and prominent positions in the industry.  Thomas Costenoble, in charge of organization and logistics for the BBC, hails from the wine world.  He is the Oenologist and Director of the Concours Mondial de Bruxelles, one of the foremost international wine competitions in the world.  Luc De Raedemaeker serves as Tasting Director and Project Manager for the BBC. Luc is a lecturer in zythology and writes for numerous beer publications around the world. He’s also a member of the British Guild of Beer Writers and has served as a juror at numerous beer competitions around the globe, including the World Beer Cup.  The combo of their impressive profiles, along with their supporting team, ensures the growth and the success of the BBC.

The event brings in beer aficionados not only from Belgium, but from around the globe to judge at this event.  This ensures not only a fair and unbiased competition, but international exposure for the winners, as well as for the event itself- subsequently spreading the word about the celebrated suds around the world. At the 2015 event there were over 1100 beer entries from all over the world, which were judged by a panel of 78 international beer experts.

Additionally, Visit Flanders and various local tourism offices have supported this event offering the judging panel and invited VIPs a beer insider’s view of their cities, including the local beers and breweries, once again showing the countries esprit de corps in promoting good beer.

As of January 2016, Brussels Airlines will show their Belgian beer savvy by becoming

the sole airline offering a choice of 8 different beers for their business class passengers. They have taken notice of the impact of beer tourism as a growing part of the Belgian tourism market and are working towards becoming part of the Beercation experience. They are so dedicated to properly promoting Belgian beer and aligning themselves with beer travel that they conducted an entire series of tests to understand how the beer would react at a high altitude before they instituted their new beer program.

“We try to offer a selection that covers the Belgian beer landscape and we always include a beer with spontaneous fermentation as well as a Trappist beer” said a spokesperson for the airline. “Within the Star Chef Programme (our business class menus are designed by Michelin Star Chefs from every region), the chef can recommend special beers from his region.”

In fact,the folks at Brussels Airlines are so into spreading the word about Belgian beer that they are the major sponsor for the sweepstakes that Bon Beer Voyage is currently offering in conjunction with DRAFT magazine for a trip for two on this year’s sold out Amsterdam to Bruges Beercation Cruise. 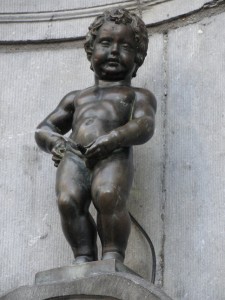 More than likely you have seen photos of this surprisingly little guy happily doing what he does best-peeing for delighted crowds of tourists who associate him with Brussels and Belgium the way many associate the Eiffel tower with Paris and France.  Every now and then, you might even catch him pissing right out into the crowds!  Of course, this is something better observed from outside of the crowd rather than in the line of fire.

We always enjoy getting to see him when he is decked out in one of his costumes (there are over 900 – with many on display just up the block in the City museum on the Grande Place).  There is a schedule online so you can see what costume he might be wearing when you are visiting.

But what really says that this statue is a true symbol of what is important in Belgium, or “The Land of Beers”, as Brussels Airlines calls it, is that on certain occasions this little pisser actually gets hooked up to a keg and pisses beer into cups for passersby!  Now isn’t that a piss?

Seriously, though, for many Belgians, beer is just a way of life. It is part of the threadwork that is Belgian culture. Thankfully, it is not taken for granted, but instead is celebrated by those who know what a national treasure they have. And those of us who don’t live there but are fortunate enough to be able to travel there know that the accessibility to so many great beers in one country- along with the passion shared by the folks behind these beers- adds up to Belgium being a beer lover’s paradise.