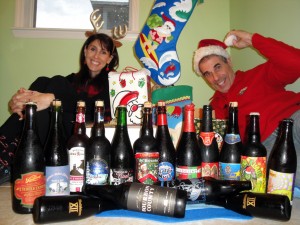 Thanksgiving remains the official kickoff for the holiday season for most people, despite retailers putting out holiday deco and playing Christmas carols earlier and earlier each year. It is the time of year we start our holiday shopping, decorating, card writing, visiting and celebrating with friends and family. For those of us that are beer lovers, the 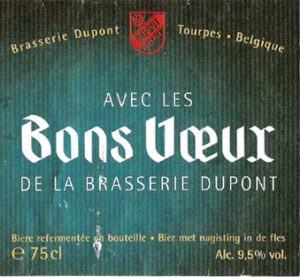 season begins when our favorite holiday beers start showing up at our local retailers. Every year I look forward to enjoying Brasserie Dupont’s Avec Les Bons Voeux with my Thanksgiving dinner. This year I waited until the last minute to go pick some up, a mistake I will not make again, since my local stores were out. C’est la vie. This gave me the opportunity to try some other beers, which led me to wonder what the favorite holiday choices were of my friends and colleagues in the beer universe. So, I asked. Apparently, I am in good company. I found out that two of my incredibly talented friends, (they serve as beer sommeliers, international beer judges, writers, consultants and more!) Sofie Vanrafelghem, from Belgium and Phillipe Wouters, from Canada are also both devotees of Avec Les Bons Voeux.

The following are some more holiday beer choices, stories and thoughts shared by other friends from around the globe:

Chris Swersey, supply chain specialist at the Brewer’s Association: “I always like Sierra Nevada Celebration. It’s seasonal, fall early winter only, celebrating that year’s harvest. It also changes every year, depending on the hop crop. This year’s is REALLY yummy.”

Nora McGunnigle, freelance beer writer, also is a fan of Sierra Nevada Celebration. Nora says that in general, she is not a fan of spiced beer of any kind; she is happy that this time of year also happens to be fresh hop season. So, it was no surprise when she also gave a shout out to Rhinegeist Dad (Hoppy Holiday Ale) which is described on the Rhinegeist website as a traditional winter warmer loaded with aromatic hops.

John Holl, NJ based award winning journalist, author and editor, shared this nice story about his own holiday beer tradition with a beer that is not traditionally thought of as a Christmas/Holiday beer:

“Every Christmas Eve I try to find a few quiet minutes to myself to enjoy a bottle of Duchesse De Bourgogne. It’s a tradition I started, by accident about 8 years ago. A friend had gifted me a bottle and I opened it while waiting for the family to come home from last minute shopping. By the lights of the tree I was taken in by this wonderful Flander’s Red and found myself slowing down, getting away from the bustle of the season, the commercialization, the craziness and actually thinking about all I was thankful for, the fun experiences during the year and all that I had to look forward to. It was a special moment with the beer playing a part. So each year, I carve out just a few minutes to open a bottle and slow down a little. It’s a little piece of peace.”

Katie Smith, brewer at Highland Brewery in Asheville, NC told us “I’m not a huge winter warmer fan so I tend to only drink Highland ones if I do which makes me a little biased; but my faves from us are Cold Mountain as well as Black Watch- which is like drinking chocolate milk.

Katie is not alone in choosing beer from her own brewery. Anne-Cathérine Dilewyns

from Brouwerij Dilewyns in Belgium says her favorite is their Vicaris Winter 2017 and Marco Passarella, Sales and Marketing Manager from Brouwerij St. Bernardus, located in Watou Belgium, listed St Bernardus Christmas Ale, along with Orval and Weihenstephaner Hefeweiss Dunkel among his favorite Christmas/Winter warmer beers.

Meanwhile, there are some who, despite brewing their own Christmas beers, have a  favorite from another brewery. Bill McFee, Brewmaster from Barrel of Monks in Boca Raton Florida, is just one of many St. Bernardus Christmas Ale fans: “My favorite winter beer is St. Bernardus Christmas. I have enjoyed that beer every year since it was released a few years ago. It has just the right amount and blend of spices, and is very drinkable and delicious!”

Inge Vermeire, guide extraordinaire from Brouwerij Halve Maan in Bruges,Belgium, was another who gave thumbs up for the St. Bernardus Christmas Ale, as well as some other extremely delicious choices: “My all-time favorite is Stille Nacht (Silent Night) brewed by De Dolle Brouwers, 12% abv made with Poperinge hops, traditional brewing method small batches; because of the high density they say that you can keep it forever. Another favorite is Bush de Noel, also 12% abv- delicious but dangerous!”

is also a favorite of Sofie Vanrafelghem, Stephane Bogaert, from Brasserie Saint Germain which makes Page 24 Beers in northern France and yours truly

St. Feuillien is another of Stephane’s favorites, but beers from elsewhere in the world are on his Christmas wish-list: “I have heard about Nøgne ø Christmas beer series, but never had the chance to get one. Christmas beer seems to be famous in Nordic countries but in a way very different from Christmas beer traditions over here(France).”

Laurent Cicurel, one of the owners of La Fine Mousse in Paris France, said he likes In a Rush Cognac BA from O’Clock Brewing.  This was a new one for me so I thought he was telling me he was in a rush when he messaged me with his choices! However, after researching and finding out that this brewery will be at one of the Christmas Markets in Paris, I have already put in a request for a few bottles with some friends headed that way for the holidays.

Fiona De Lange, Biersommelier, Beer Writer and Founder of the Bierbank, located in the Netherlands, chooses between her favorites based on the weather: “Val-Dieu Grand Cru, Duits & Lauret Winterstout, Jopen Ongelovige Thomas and Gouden Carolus Cuvee van de Keizer Blue. I’m looking for chocolate bitterness and alcohol warming. If it’s very cold I like more caramel and alcohol warming winter beers like Val Dieu and Gouden Carolus. If the weather is warmer with rain I prefer more chocolate / malt bitterness which you can find in the beers of Jopen and Duits & Lauret!”

Kim Lentjes, another friend from the Netherlands and founder of the Dutch Beer Academy, is also a fan of Gouden Carolus beers from Brouwerij Het Anker in Mechelen :

“My favorite beer for the season is either a Gouden Carolus Classic or a Deus Champagne beer from Brouwerij Bosteels. Both Belgian, I know.”

She went on to share a bit about both of her choices:

“The Gouden Carolus is based on a great story of when Charles V was emperor of Spain and the Netherlands and he would come to Mechelen to hunt. To get good fortune he would give away golden coins to the people. That’s why they called him Gouden Carolus, or, Golden Charles. However, the dear man had a stomache condition and he wasn’t able to drink wine because of the acidity. So, the grateful people of Mechelen brewed him a beer that is similar to red wine, the rich people ‘s drink. In the winter this beer makes me feel warm and grateful. It is rich, and dark and complex and has a great story. Drink it with a good steak with a rich sauce, red wine or even a great jus, and you’ll be in heaven. Great with venison too!

Deus is also a Belgian beer, but during the fermentation it is exported to France. There it is Aged/fermented with champagne yeast. The end result is a great slightly sweet beer with an amazing fizz!! Just like a champagne, but it is beer!!It is dangerously easy to drink!!  it is an amazing beer!!! Very expensive, but I tend to spoil myself with it every now and then! Totally worth it!”

We have to agree, Deus is one of our go-tos for a sparkling New Year’s toast.

We are looking forward to sharing our favorites from those listed above, as well as going in search of those that are new to us. How will you be celebrating the holidays? What will you be drinking? Whatever it is, we wish you a Delicious Holiday Season!