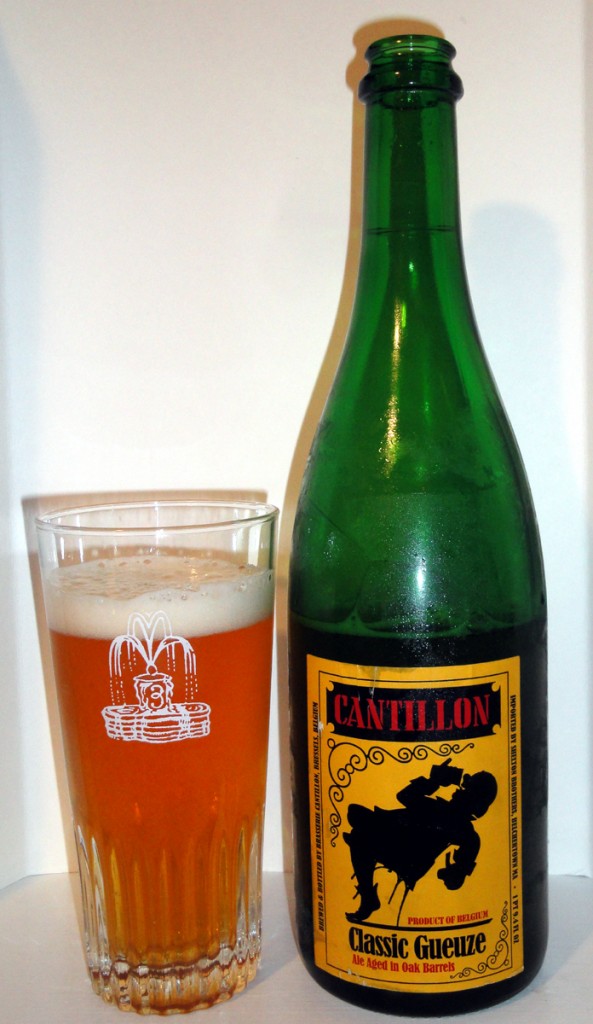 I paired this beer with: Steamed tilapia with a spicy lemon marinade.  Great Pairing!!!

The beer poured a hazy light orange with a small fluffy white head and many tiny bubbles like you would see in a glass of champagne.   The nose was funky and barnyard like, with hints of lemon zest.  The taste hits you first with some funk and mildly tart on the acidic side, and then I picked up some lemon and green apples, and end up very dry.  The mouthfeel was of a light to medium body and a very nice level of carbonation to tickle the tongue.  The drinkability was fabulous and like the label says is a Classic Gueuze which I can drink all day.

A blend of one, two, and three year-old lambics, refermented in the bottle. Store and serve at cellar temperature (50-55 F/10-13 C).  Do not serve cold!  Pour gently (leaving behind the yeast sediment) into a wine glass or traditional Belgian tumbler.

In the 18th century, a Benedictine monk, dom Pérignon, discovers the champaign method by blending different non sparkling white wines. One century later, a Brabant brewer blends different lambics and brings about a spontaneous fermentation in the bottle. The Gueuze is born.

Up to the 19th century, the people from Brussels and Brabant mostly drank two beers, Lambic and Faro. The glass bottle and the discovery of Dom Perignon will bring about a revolution in the small world of the Brussels brewers. The Gueuze became the icon of the Brussels beers.

Lambic, which is the base for the making of Gueuze, is a spontaneous fermentation beer. All beers made with Lambic are naturally sour, but some will be more sour, more bitter or “softer” than the others.

The Gueuze is the result of a well-considered blending of Lambics of different ages and with different tastes.

The Lambic beers from the Cantillon brewery, which are conserved in oakwood barrels, are called “young” after one year, but they will reach their full maturity after three years. The young beers contain the sugars which are necessary for the second fermentation in the bottle. The three years old beers will contribute their taste and their flavour.

The main task for the brewer, however, is tasting. He will taste about ten Lambics from different barrels in order to select five or six which will be used for the Gueuze 100% Lambic presenting the typical characteristics of the beers from the Cantillon brewery.

The bottles are closed with a cork, capped with a crown-cork. They will remain horizontally in a cellar for a year on average, in order to allow the sugars to be converted into carbon dioxide (second fermentation in the bottle). The saturation of the beer is slow and natural. When the Lambic becomes sparkling, it is called Gueuze. At that moment, this crown-jewel of the Cantillon brewery will leave the cellar of the brewery and find its way to the cellars of the lovers of the traditional Gueuze.

Every blending will produce a different Gueuze. Since we work according to a natural process, it is impossible to make a standard beer.

This beer is not only unique because of its brewing process, but also because it can be conserved for a long time. When kept in a good cellar, a Cantillon Gueuze will still have an exceptional taste and flavour after 20 years.

The Gueuze 100% Lambic Cantillon represents half of the production of the brewery.