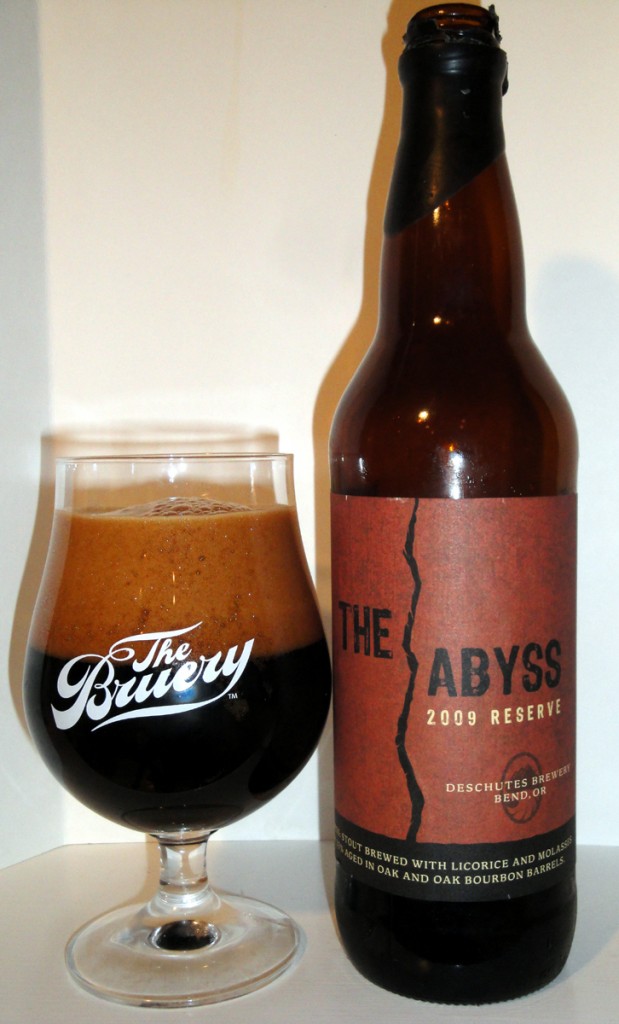 How served:  22 oz black waxed and capped bottle poured into The Bruery tulip.

I paired this beer with: Game 5 of the Heat vs Sixers playoff game.

Notes:  This is a 2009 vintage.  There have been many claims that some of the 2009 bottles of The Abyss are infected, so I am holding my breath that this is not one of them.  I last tried this vintage in Dec 2009 when it was “fresh” and there were no signs of infection at that time.  However, this is a different bottle and has aged at least 16 months, which could have given any nasty bugs time to do their dirty work.

So here it goes.

As I removed the cap I heard a faint hiss.  So far no signs or scents of an infected brew.

The beer poured a very dark deep brown to midnight black with a 2 finger dark tan head which dissipated by the time I was half way thru my glass and left a minimal lacing on the glass, so far no odd smells.  After taking a deep whiff from my glass I’m sure this in not infected as all I got from the nose was bourbon, chocolate, molasses, vanilla and some coffee.  The taste was like the nose,  I got bitter chocolate, molasses, mild bourbon notes and vanilla plus I was able to pick up some of the black licorice flavor which I love.  The beer had a medium to thick slick mouthfeel with a nice carbonation level.   The drinkability of this 11% abv brew was very good with minimal heat from the alcohol.  I’m glad I got a “good” bottle, now I have to hope my others are good too.  I’m looking forward to doing a vertical tasting in 2013, as I have the ’06, ’07, ’08 & ’09, now all I need is the ’10, ’11.,’12 & ’13!

On the Label:  Best after 11/1/10. The Abyss: Stout brewed with licorice and molasses with 33% aged in oak and oak bourbon barrels. It’s dark. It’s deep.  It’s mysterious.  This imperial stout has immeasurable depth inviting you to explore and discover its rich complex profile.  The flavor of this special brew draws you in further and further with each sip.  The Abyss beckons.  Enjoy the journey.

A deep, dark Imperial Stout, The Abyss has almost immeasurable depth and complexity. Hints of molasses, licorice and other alluring flavors make it something not just to quaff, but contemplate.

As for the great “drink it now or let it age” debate, we stand clearly on the fence. Distinct and delicious on release, the flavors meld and fuse into an entirely different pleasure a year on.