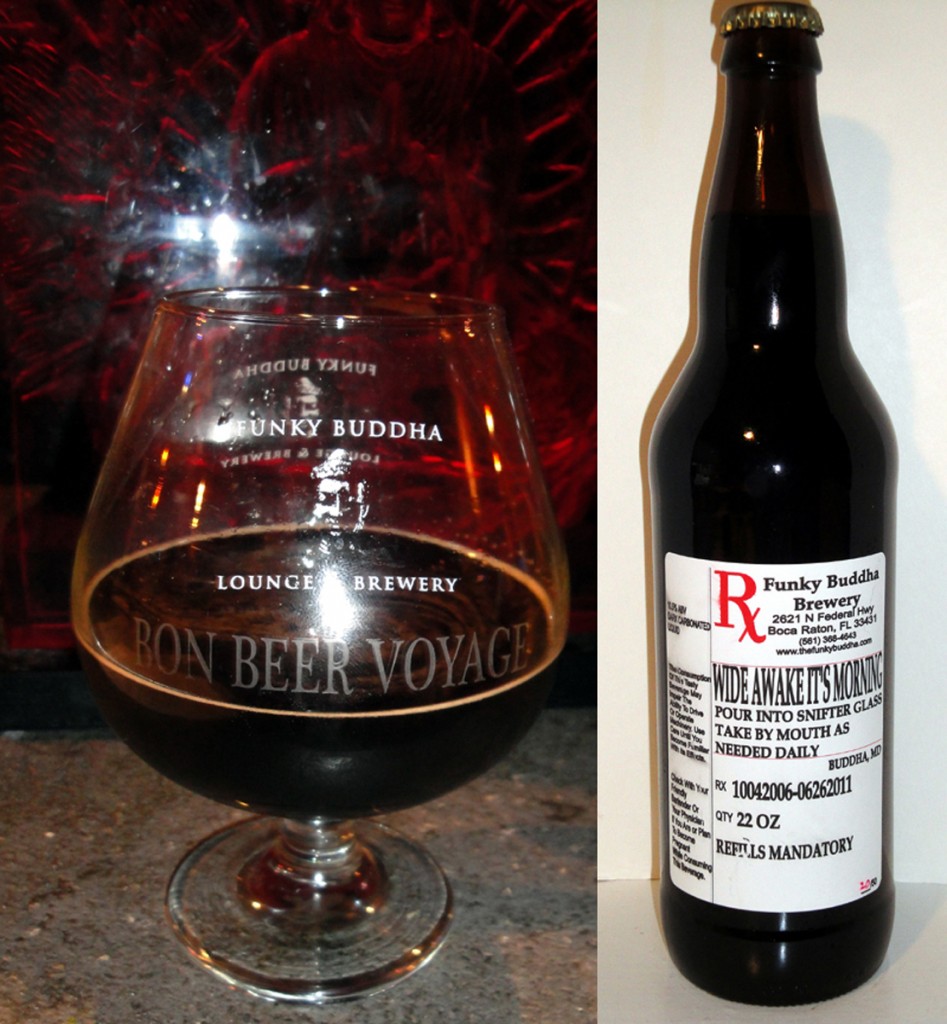 Today was the GRAND OPENING of the Funky Buddha Homebrew Store (located directly next door to the Brewery) and the release of their highly anticipated Imperial Maple Bacon Coffee Porter.

The regular version of the Maple Bacon was at one time the number one buzz beer in America on beeradvocate.com and remains the number one American Porter. It was also the number one sweet stout on ratebeer.com.  Their Imperial Version comes in at 10.5%ABV!  The Grand Opening of the store and the release of the Imperial Version  was at 3:00pm today with a special 2:00pm preview for their Snifter members.

Now for my Review of Wide Awake It’s Morning

I paired this beer with:   Nothing.

Notes:  This is the Imperial version of their Maple Bacon Coffee Porter.  Today was the official release of this beer.  Besides what was poured on tap, only a total of 50 bottles were released to snifter members

This beer pours a dark brown, almost black with a very thin layer of beige foam.

The nose was what you would expect from the name, roasted coffee, maple and hints of smoked bacon.

The taste was a little more intense than the nose, with the roasted coffee and the maple sharing equally as the stars of this brew and the smoked bacon playing second fiddle.  This beer was well balanced with it not being too sweet, which you might have expected from the maple.

This beer had a medium to thick mouthfeel with an extremely low level of carbonation; it finished with a very pleasant slickness on the palate and a nice warmth from the alcohol.

The drinkability was excellent as it went down nice and easy for a 10.5%abv brew.

Overall, if you liked the “regular” Maple Bacon Coffee Porter, you will not want to miss this one.  I liked this Imperial version better, as my palate like the balance of this one more.  I hope they will be brewing this one again!!

On the Label:  (Rx type label)

The Consumption of this Tasty Beverage May Impair The Ability to Drive or Operate Machinery.  Use Care Until You Become Familiar with its Effects.

Check with your Friendly Bartender or Your Physician if You Are or Plan to Become Pregnant While Consuming This Beverage.