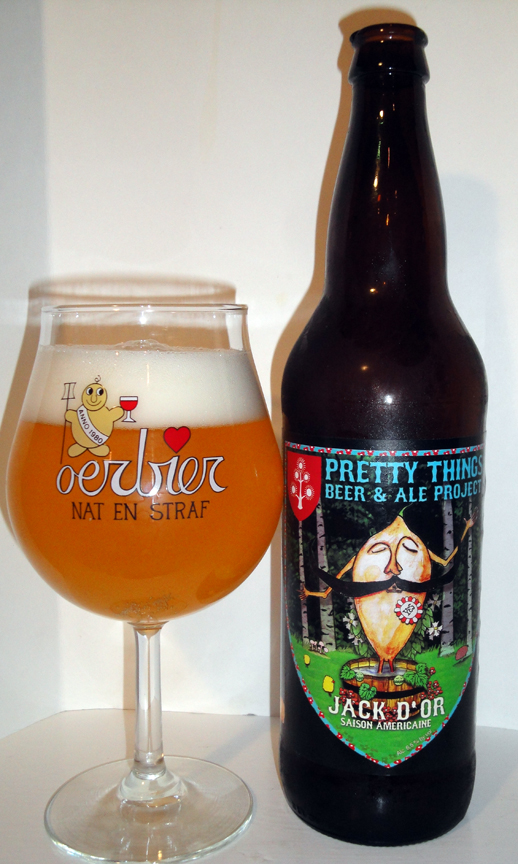 I paired this beer with:  Tilapia oven baked in foil with black olives & cheery tomatoes served over couscous.

This beer poured a cloudy golden/straw color with a 2 finger white head which dissipated quickly leaving only a trace of lacing on my glass.

The nose had a slight perfumy/floral/herbal nose with traces of grass.

The taste is full of spicy/peppery notes with hints of cloves, grass and lemon.  This brew is very dry and refreshing.

This beer has a medium body with a soft carbonation level.

On the Label:  Saison Americaine.  The great mustachioed barleycorn himself, Jack D’Or stands alone in a forest, knee deep in a mash-tun, conjuring himself into beer.  Master of four ingredients, Jack D’Or is inspired by the great farm-brewed ales of Belgium.  Jack D’Or is a modern American saison.  Look for a sharply bitter backbone with a dry, herbal character, finishing with a spicy, fruity hop finish.  We ferment Jack D’Or with three yeast strains for complexity and dryness.  No Spices or sugar are added.

Pour with gusto down the center of a stemmed glass, pausing to allow heart to settle, then continue.  Be patient for best enjoyment!  Bottled in March 2013

“Jack D’Or” is a simple table beer, or “Saison Americain” as we’re referring to it. We are not trying to coin a beer style – we’re just having fun. The Jack D’Or (pronounced “Jack Door”), is at the very center of Pretty Things and nearly three years on we’re still pleased as punch that he joined us!

As you know, PRETTY THINGS doesn’t brew “styles” per se. Close, but we re-imagine everything and leave the style numbers in books on the shelves where they belong. What that means is that while other people might be able to put our beers into a category, we have a hard time with it! Our beers are first and foremost creative beasts, not “types” of beer. Jack D’Or is the kind of beer Martha and Dann like to drink before, after and during a great meal. Heck, we’ll drink this sort of beer any time.

On Dann & Martha’s honeymoon in France and Belgium they stashed quite a few cases of Wallonian beer into their trunk. Every night after setting up their tent they’d cook lardons and lentils on a camp stove and enjoy fresh “saison” under the stars.

Inspired by some of our favorites like Saison DuPont, but also DeRanke’s XX Bitter, De Dolle’s Arabier, and local IPAs like Smuttynose, the Jack D’Or starts off with North American Pils, Vienna, Wheat and Malted Oats (among others) and is hopped with a combination of four hops, finishing with Palisade and Nugget. The bitterness is the real backbone of the Jack D’Or. It’s a proper “plant-like” bitterness with all of its jagged edges, beginning deep in the soil, then to the stem of this beer and up into to the very tippity heights. Fermentation-wise we use a blend of four yeast strains to give Jack D’Or its refreshingly dry character. Finally, despite all of the spicy flavours in this beer it contains no actual spices – only malt, oats, rye, sugar, hops and yeast. One more time: there are no spices or citrus in Jack D’Or. Wheat lends acidity at Jack’s edges, then rye and our blended yeast character come into play for a bit of polyphony, displeasing the notion of “balance” and creating the fire in the belly of Jack D’Or!

The creature on the label is Jack D’Or himself, conceived and drawn by Dann. Far away in a small clearing in the woods of New England, ankle deep in the mash tun, he contemplates and conjures himself into a batch of beer. For those of you who are new to this, Jack is a grain of malted barley, but more than that: he is the unifying force behind all of the Pretty Things. Jack D’Or Must Die!

Love Great Beer?
Love to Travel?
Join Us on One of Our Beer Trips & Beer Tours!