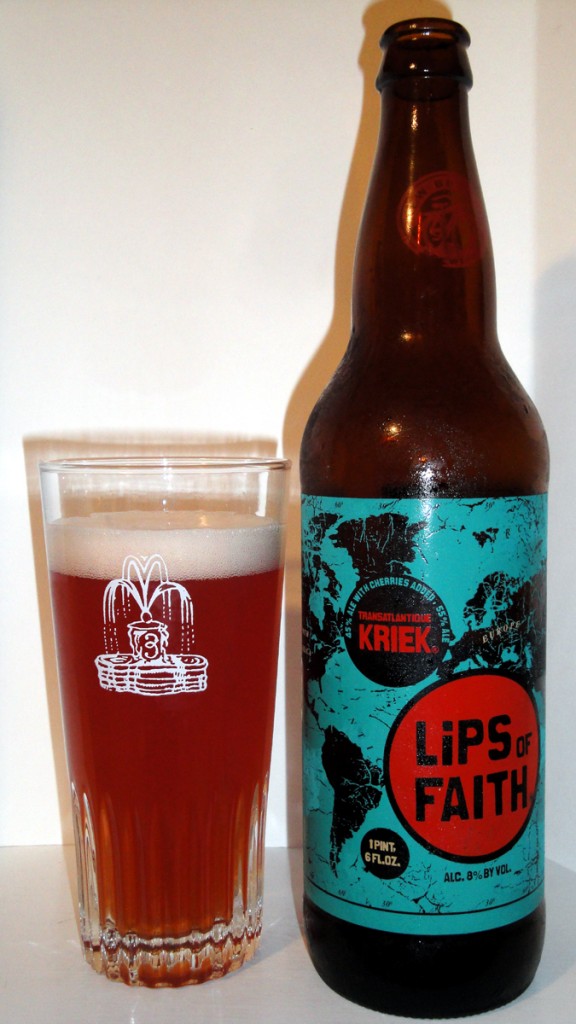 How served: 22 oz capped bottle poured into a 3 Fonteinen Tumbler.

I paired this beer with: Bar-B-Que chicken.  Nice pairing!

Note:  This beer poured an opaque light red with a 1 finger fluffy white head leaving a minimal lacing on the glass.   The nose was of sweet cherries and oak.  The initial taste was of sweet hard cherry candy, some oak and finished with mild cherry tartness.   The mouthfeel was thin with a medium level of carbonation.   The drinkability was good with no notice of the 8% abv.  I felt like I was drinking a cherry soda rather than a Kriek Lambic.   This is one beer I would not be buying again anytime soon, as there are many other Krieks I have enjoyed and would rather have.

From their website:  In a never-ending quest to create new beers and defy category, New Belgium Brewing and Brewerij Boon of Belgium have partnered together again to create Transatlantique Kriek – a spontaneously fermented lambic ale made with Polish cherries.

This authentic kriek beer began life in the oaken vessels at Frank Boon’s brewery in the Lembeek region of Belgium.  After more than two years aging, Boon’s offering shipped across the Atlantic and found its way to the intuitive palate of New Belgium’s Brewmaster Peter Bouckaert.  After much sampling and internal consultation, Peter and his brew staff created a full-bodied golden lager to round out the light-bodied kriek.

The cherry nose gives way to a pleasingly sour flash across the palate that rolls gently into a slightly sweet finish.  Crisp, effervescent carbonation keeps the mouthfeel bright and delightfully tingly.

Join Us on a Bon Beer Voyage Beercation!