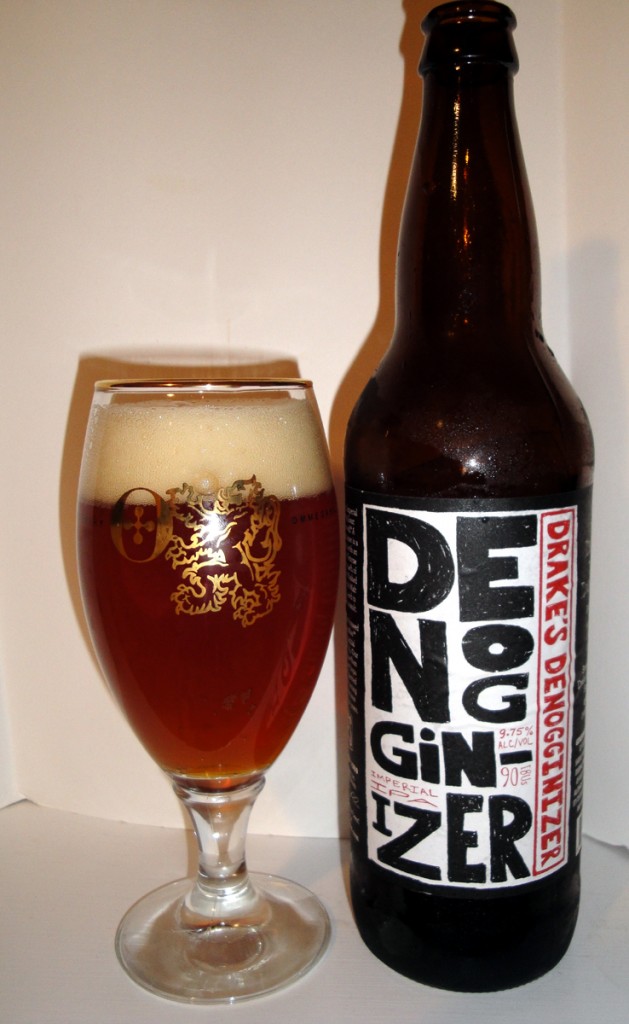 How served: 22oz capped bomber poured into an Ommegang glass.

I paired this beer with: Grilled Tilapia topped with a spicy salsa.

Note:  This beer poured a copper color with a 2 finger light tan head. It left a thin lace near the bottom of the glass.   The nose was both malty sweet  & had piney and grapefruit notes. The taste was leaning more towards a Barleywine then a DIPA, it was malty sweet up front, then bitter on the back side and very well balanced. It could be that the hops have faded since this beer is about 5 months old.  The mouthfeel was smooth with a medium body.  The drinkability was very good and leaves you wanting a 2nd  Bottle.

On the Label:  Silver Medal Winner, Imperial India Pale Ale, 2009 Great American Beer Festival.  A Double IPA, Denogginizer is a big bold beer hopped with an abundant amout of Simcoe & Columbus, with a touch of Amarillo & Cascade.  Mashed with Munich & Crystal Malt for color and flavor…and to balance out the hop assault.

Drake’s ales are urban-brewed at the former Caterpillar powerhouse in industrial San Leandro, California.  Our brewery is more gritty than pretty, but with great hops & barley malt, our talented brewers have been turning out unique and delicious beers here for over 20 years.

Established 1989: Owned & Operated by the Kirkorian & Martin Families.  We hope you like our beer!  Let us know at www.drinkdrakes.com

From their website:  Drake’s Denogginizer Double India Pale Ale – 10% ABV, 100 IBUs!
Silver Medal winner for Imperial India Pale Ale, Great American Beer Festival 2009. Besides Jolly Roger, this is probably Drake’s most renowned beer. An Imperial (or Double) IPA, Denogginizer is a big bold beer hopped with an abundant amount of Simcoe and Amarillo with a touch of Ahtanum and Chinook. Mashed with Crystal malt and Caramalt for color and flavor to help balance out the hop assault. Denogginizer is also Drake’s most powerful regular offering, at a whopping 10% alcohol by volume!