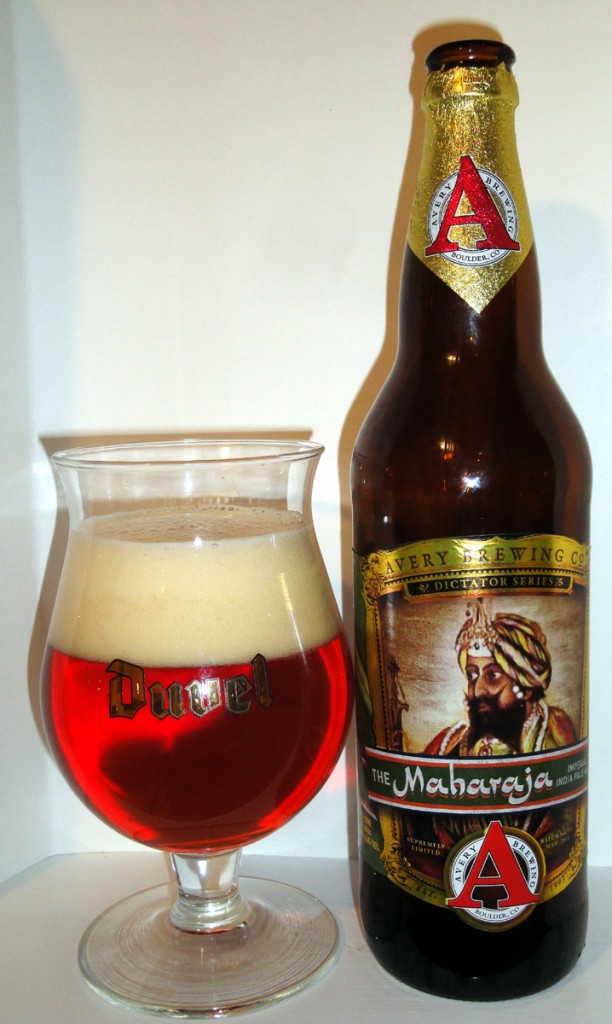 How served: 22oz capped bottle poured into a Duvel tulip.

I paired this beer with:  Snyder’s of Hanover Hot Buffalo Wing pretzel pieces.   This was a very interesting & a very good pairing.

Notes:   This beer poured a deep amber color with a thick off white 2 finger head which left a minimal lacing on the glass.  This beer had a very pleasant nose; mostly fruity/floral hoppy notes hitting me 1st then some piney hoppy notes in the background.  The taste started off sweet with sweetness from the malt then a quick rush of citrusy hops hitting my taste buds with grapefruit rind the primary taste, then a milder piney hop taste in the end.  The mouthfeel was of a medium body with a nice refreshing finish and a nice level of carbonation.  The drinkability was good, the alcohol level was very apparent as you drank this beer making you slow down as you enjoyed this beer.  As far as Imperial IPA go, this is a very good representation of the style, but there are other which are much better.  However given the price point of this brew, this is an awesome bargain and should be on your list of top Imperial IPA’s to try and try again year after year.

On the Label:  Maharaja is derived from the Sanskrit  mahat, – “great” and rajan – “king”. Much like its namesake, this Imperial IPA is regal, intense, fierce and mighty. With hops and malts as his servants, he rules both with a heavy hand. The Maharaja flaunts his authority with a deranged amount of hops: tangy, vibrant and pungent, along with an insane quantity of malted barley, fashioning a royal scarlet hue and an exquisite malt essence. Welcome to his kingdom!

The Avery Dictators Series was born of an inexorable need to trek further into the depths flavor: all three of the Dictators represent an exploration of beer flavor through the medium of traditional ingredients. How far can you stretch the boundaries of what beer can be using only water, malted barley, hops and yeast? The Czar, The Kaiser and The Maharaja are our answers to that question. Intrigued? Avery Brewers invite you to search out all three and further your own understanding.

Imperial India Pale Ale
Hop Variety: Simcoe, Columbus, Centennial and Chinook
Malt Variety: Two-row barley, caramel 120L, victory
OG: 1.090   ABV: 10.24%   IBUs: 102
Color: Dark Amber
Availability: Seasonally produced from March through August. 22oz. bombers, 1/6BBL and 1/2BBL kegs.
Maharaja is derived from the sanskrit words mahat, – “great” and rajan – “king”. Much like its namesake, this imperial IPA is regal, intense and mighty. With hops and malts as his servants, he rules both with a heavy hand. The Maharaja flaunts his authority over a deranged amount of hops: tangy, vibrant and pungent along with an insane amount of malted barley – fashioning a dark amber hue and exquisite malt essence.

Be aware that The Maharaja is a limited release only available for the summer. Welcome to his kingdom!

Food Pairing: Try The Maharaja with some Shrimp Cocktail and you’ll find that the intense, “grapefruity” hop aroma is a perfect compliment.