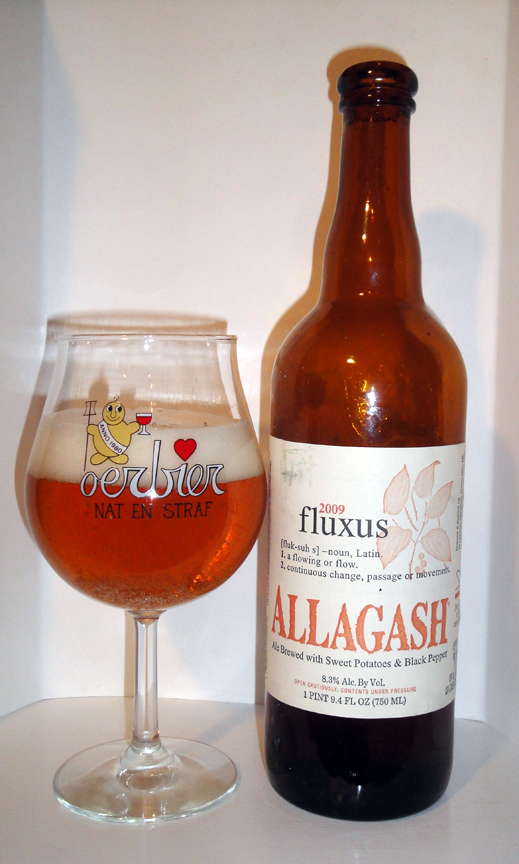 I paired this beer with: Would you believe a potato knish topped with deli mustard.

Notes: This is from batch #1. This beer is no longer brewed. This Ale is Brewed with Sweet Potatoes & Black Pepper

The cork came out of the bottle with a nice “pop”. The beer poured a mostly clear light golden color with a few floaters. The head was white and about 2 fingers high which left a thin sticky lacing on the glass.

The nose was very floral, herbal and peppery. There were also hints of honey and an earthy funkiness.

The 1st thing that hits me as I tasted this beer is the ground pepper and the spices from the yeast. Mid way through I picked up some sweetness from the malts, brown sugar and a mild orangey flavor which mixed with the pepper, spices and earth flavors and a very faint pumpin pie (guess the punpkin pie was from the sweet potato). This beer finishes on the dry side with a very refreshing finishes which lingers on the tongue.

This beer had a medium crisp body with a nice carbonation level.

Overall I did this was a very delicious beer and very true to the Saison style, hopeful someday Allagash will make this one again.

Fluxus is a beer brewed every year to commemorate the anniversary of our first beer sold in July 1995. The name Fluxus is Latin for continuous change, something we seem to find ourselves in. Every year, Fluxus is brewed with a different recipe, giving our brewers a chance to push the limits of beer.

*Allagash Fluxus is brewed to help fund a scholarship set up for pediatric nurses at The Barbara Bush Children’s Hospital at Maine Medical Center. For details on the great work that they do there, go to mmc.org.

Fluxus ’09 was brewed in the style of the traditional Saison. For our twist, we added sweet potatoes, black pepper and a generous amount of hops. Sweet potatoes not only enhance its pale orange appearance, they contribute significant body. Centennial hops produce a bold grapefruit aroma, which is followed by a mild, honeysuckle sweetness. The intensity of both the pepper and hops are felt throughout, leaving a lingering warmth on the tongue. Papya, citrus and pepper dominate the flavor profile.