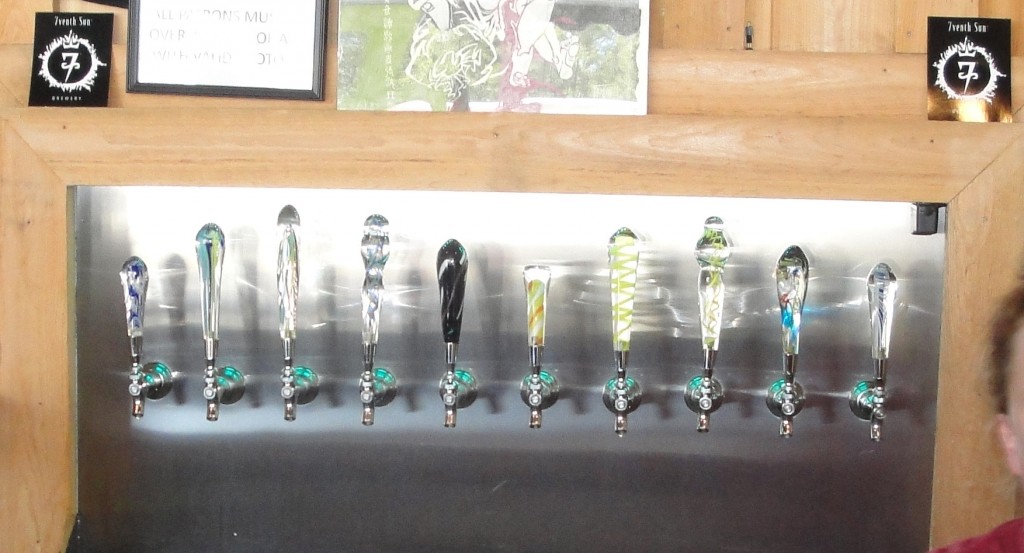 Less Than 10 Days Left Until…

We will Visit 5 Breweries, Have 2 Gourmet Beer Paired Dinners, Enjoy a Beer Paired Lunch and much more over our 2 Night Stay in Tampa Bay!

Hurry We Only a Few More Spaces Available Until This Weekend is a Sell Out!

This month’s Brewery Spotlight will be on one of Florida’s newest breweries: 7venth Sun. Read Devon Krebs’ thoughts on opening a new brewery and taste some of their already popular brews during our upcoming Tampa Beer Safari Weekend February 10-12. There are still a few spaces left, so it’s not too late to grab a spot on this incredible beer filled weekend when we’ll be visiting 5 breweries! We’ve also opened up a few seats for the awesome beer paired gourmet dinner at Fleming’s Steakhouse, so if you live in the area and can’t make the beer tour, we’d love to have you join us for this delicious dining experience!

Kreps and Stange both come with industry background and are already creating quite the buzz on the Florida Beer Scene.

We are really looking forward to visiting 7venth Sun on our upcoming Tampa Beer Safari weekend. For those of you who can’t join us in person, Devon filled me in on the story of 7venth Sun. As for the beers, well, we’ll have a toast for you while we are there!

BBV: Why the name 7venth Sun?

Devon: I wanted something with the number seven in the name because it’s a lucky number for me. My birthday is on the 7th of January and it’s a number that pops up in my life a lot. So we were looking online to see if we could find anything cool incorporating the number seven and we found the story of the seventh son of the seventh son having mythical powers – we thought that was a cool story and had potential to play into the story of our beer as well. So we went with it and gave it a Florida twist – changing it to Sun from Son.

BBV: What make you decide to open a brewery?

Devon: It’s something we’ve both wanted to do for a really long time. When I was in my first year of college and trying to find a major to study, I was pulled between the arts and science/math. When I found out that Oregon State had a Fermentation Science program I knew I’d found my path. I was already a lover of craft beer and I thought it was the perfect opportunity to meld creativity with science. Justin has been a craft beer lover for a long time too. He started out volunteering at McGuire’s pub in Destin and then followed his dream to Colorado. Eventually he ended up getting a job at Sweetwater Brewing in Atlanta where he worked his way through the entire process and became one of their top brewers. When we moved to Florida, he began working with Cigar City while we did the groundwork for 7th Sun.

BBV: What has best part of the experience for you so far?

Devon: When people tell us they love the beer there is nothing better than that. Our love of great beer is the reason we are here and to be able to create something that other people love too is the best reward there is.

BBV: Is there something you feel that really differentiates 7venth Sun from other craft breweries?

Devon: We have a relatively unique style line up that we feel compliments some of the existing breweries in the area. Our three year round beers are Midnight Moonlight, a Berliner Weise, Saison in Paradise, a French-style saison with grains of paradise and FYA, an Amarillo single hopped Extra Pale Ale. We like to focus on IPA’s and Belgian beers and our small system allows us to do a big variety of things. We also play around with ingredients to have fun with it – like the donut porter – but we are most proud of our traditional styles, some of which are still relatively unknown to most people; like our Berliner Weisse, a tart, light bodied, low alcohol beer, which is a relatively old-style beer from Germany. We like to bring out some of the flavors of this beer by using fruit blends that accentuate the citrus notes and a lot of Florida fruits pair well with this beer. Also, we are beginning work on a barrel aged program that will include both second use whiskey barrels as well as some naked oak and second use wine barrels. We will incorporate a sour beer program in this regiment as well, drawing on our love of the Lambic and Belgian sour beers.

Devon: We hope that our current small space helps us fund a larger facility. We don’t aim to be an extremely large brewery but maybe hitting somewhere around the 10,000 barrel per year mark. The timing of that will depend much upon how things progress for us, especially as we roll out distribution.

BBV: Anything exciting coming up or any other news you want to share with our readers?

Devon: We are looking to roll out distribution of our beer to coincide with the very recently created Tampa Bay Beer week which takes place from March 3rd to March 10th. In addition to having our beer roll out in select accounts we will also be participating in a number of beer events that are currently in planning for the Tampa Bay area.

Join Us for Some Sunshine, Sights & Suds

During The 3rd Annual

This trip makes a great Valentine’s getaway! Plus, it’s in sunny Florida in the middle of winter, what more could you ask for?