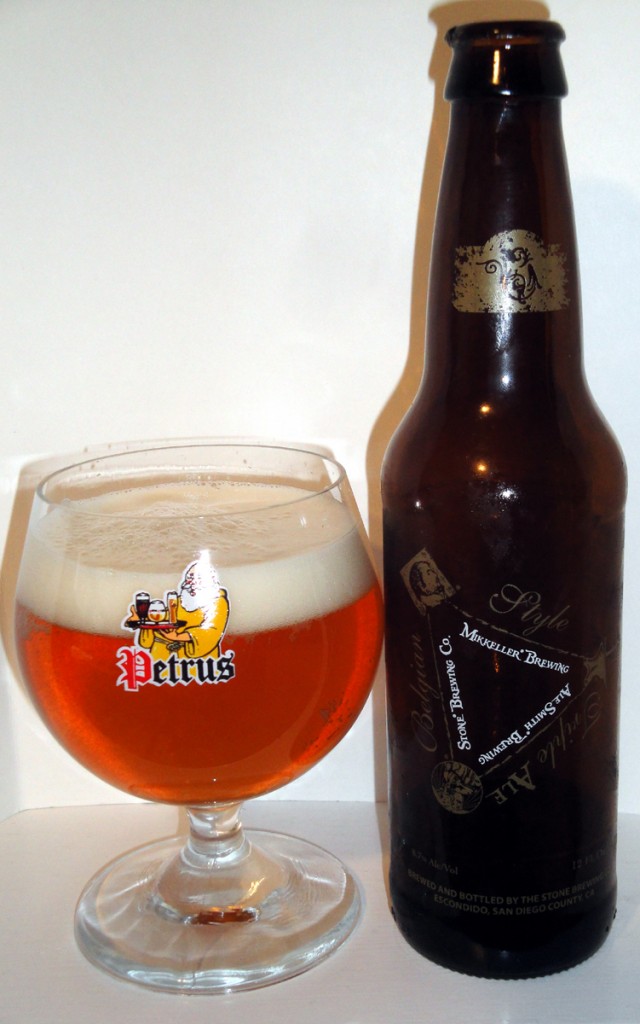 How served:  12 oz capped bottle poured into a Petrus glass.

I paired this beer with:   Nothing.

This beer pours a deep gold with a 1 finger head which dissipated quickly and left a thin lacing on my glass.

The nose had notes of lemon, spices, sweet malts/candi sugar and Belgian yeast.

The taste started off sweet from the malts and candi sugar, then was followed with spices like cloves and coriander and ended dry and bitter.

This beer had a crisp mild to medium mouthfeel with a low level of carbonation.

The drinkability was smooth and easy.  Pour me another please.

On the Label:  This is a story of how a collaboration brew with – IMO- two of the greatest breweries on this planet initially began with a “fizzy yellow beer.”  It all started in Denmark in the late 09’s when a group of friends and I started going to a bar in our neighborhood that sold a bucket of imported beers. My first love was (yikes) an American fizzy yellow beer…..Well, things have changed since…. We learned that there was SO much more when we discovered American craft beer and we were soon to never touch the fizzy yellow stuff again!  When American craft beer came to interest and with the birth of the first Danish microbreweries, so came the birth of my wanting to brew my own beer.  I got together with Kristian (Keller) and we started brewing in our kitchen in 2003.  As the beer scene progressed more and more US microbrews found their way to Denmark and we started downing beer from far away breweries such as Stone, AleSmith, Three Floyds, etc and they all blew our minds…….I Thought; what’s the heck is going on in Denmark??…why isn’t anybody brewing these kinds of ales?  And so Mikkeller was born…It’s been a couple years now and things has moved faster than the speed of lightning.  Ok let’s get to the case…why are you sitting here in with an ale brewed in friendly collaboration between two US and one Danish brewery in your hands??  Because the world is a small place and because I am one of the luckiest brewers on the planet.  Since tasting the wonderful nectars of the US my dream has been to brew with some of the best brewers on the planet and this ale is the result of realizing this dream.  It’s a result of a fizzy yellow eventually turning me into US beers and getting me turned into Stone and AleSmith. — Mikkel Bjergsø

From their website:   Sure, we’re a bunch of Arrogant Bastards, but we humbly admit that we were inspired to start brewing by other fantastic breweries and homebrewers. There are a whole lot of fellow craft brewers who we respect and admire, and who we’ve wanted to collaborate with. So why just dream about it? Starting in 2008, we released a new series of collaboration beers. The goal was to get three brewers from three different breweries to put their heads together and have some fun with no regard for boundaries. No restrictions on fitting a beer into a lineup, using familiar ingredients, conforming to preconceived beer styles, using tested procedures in the brewing process or even affordability. Each of these beers is the result of three brewers coming together and doing what they love. Therefore, many of our collaborations include ridiculous amounts of decadent ingredients without regard for shelf price. And because our collaborations are usually only brewed once, they can be rather difficult to find, and once they run out—they run out. Consider yourself warned.

If you’re lucky enough to get your hands on these liquid tributes to the spirit of camaraderie, you’ll agree that the end result is worth it.