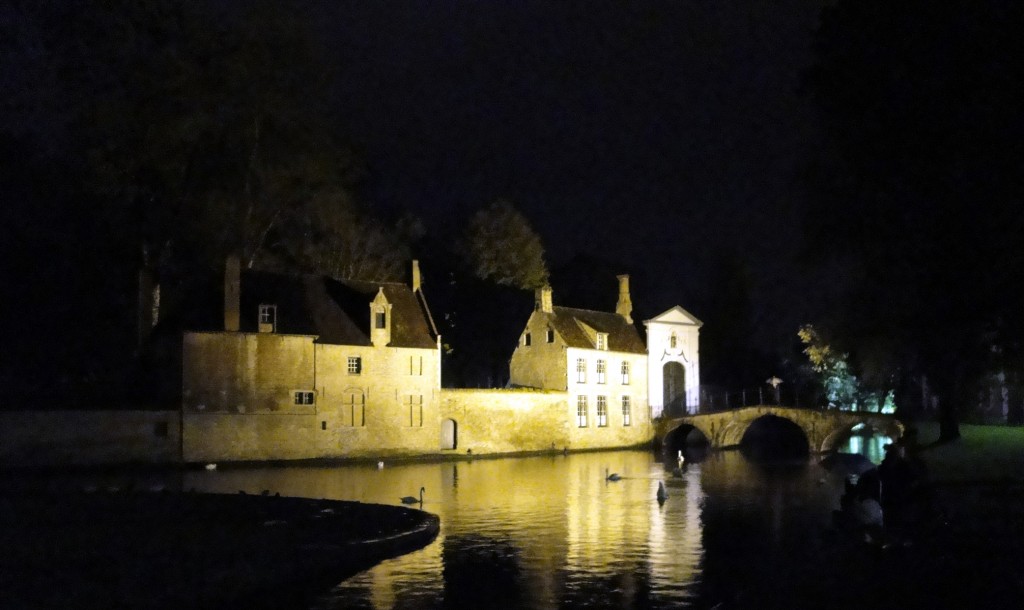 We started off this beercation with (what else?) a welcome aboard beer toast. We toasted with a Wieckse Witte a Witbier at 5.00% abv, brewed by the now defunct De Ridder Brewery.

This toast was followed with a gourmet lunch in which our chef used this beer to prepare both the appetizer and the main meal, which was spectacular.

After we had our whistles wetted and our stomachs satisfied, we headed off to visit In de Vrede, the pub at the Abbey Sint-Sixtusabdij van Westvleteren.

While in the café we all had a chance to try the Westvleteren 12, 8 & the Blonde.

After tasting these world class beers, some of the group visited the Claustrum, which is an exhibition room where you can get a feel about a monk’s life in the abbey.

We left In de Vrede and walked across the street to the Abbey. We found out that our timing was amazing, since that day, for the 1st time they would be selling 3 packs (one 12, one 8 & one Blonde) to the general public in the area where the cars usually pick up their crates of Westvleteren beer.

Normally you can only buy this beer either by the 6 pack at In de Vrede, if available, (and not on a Saturday, when we were there) or by the crate at the Abbey by making a reservation in advance by phone only.  So, to our delight we were able to purchase a few 3 packs from the monks along with some Westvleteren infused chocolates!

Our next stop was to the family owned brewery De Dolle Brouwers.

Here we were 1st given a tour of the facilities and a history of the brewery by Mous, the 93 year old mother of the brewers.

After this very informative beer tour we got a chance to sample some of the beers.

Else, the wife of Kris Herteleer, one of the 2 brother brewers, poured us a tasting of Oerbier and Arabier from the tap.

Oerbier is their flagship beer which is a Belgian Strong Dark Ale at 9.5% abv.

Arabier is a Belgian Strong Pale Ale at 7.0% abv.

After tasting those 2 beers, we had a couple of surprises.  The 1st surprise was a chance to taste the Lichtervelds Blond.

Lichtervelds Blond is a Tripel at 9.0% abv and is made almost exclusively for the town of Lichtervelds.

Else explained that 80% of their production of this brew, which is made once per year, is given to the town of Lichtervelds for a festival, with the other 20% kept at the brewery to be sold only for consumption onsite.

Our 2nd surprise came after discussing Christmas beers and questioning when the 2010 Stille Nacht would be available.   To our astonishment, Else pulled out of the refrigerator a bottle from their 1st bottling of this year’s version, which was bottled only 3 days prior.  She confessed that she and her husband Kris hadn’t even tasted this year’s batch.  They were going to save that bottle to taste that evening, but fortunately for us, they were kind enough to share it with us!

Stille Nacht is a Belgian Strong Dark Ale at 12.0% abv.

This year’s batch is fantastic and was less sweet then the past few years, which made this one extremely drinkable.  I would suggest finding this brew to drink now and to save a few to age.

By the way, Kris is not only a fantastic brewer, but a fabulous artist.  Throughout the brewery and bar area you can see his artwork.

After dinner on the barge, which was as good as you would find in a 3 star Michelin restaurant, some of us went on a beer hunting expedition to ‘t Brugs Beertje .

At Brugs Beertje we sat down and shared a few brews and great beery conversation with my friend Filip Geerts, who produces the Belgian Beer Board website, his wife Katrien, and Regnier,who runs the Bruges bottle shop De Bier Tempel .

Before we got a chance to look of the beer menu, Filip & I exchanged early Christmas gifts.  I got him the  Cigar City Hunahpu’s Imperial Stout from Cigar City Brewing and he got me the Bush Ambrée Triple. This Belgian Strong Pale Ale has a 12.0% abv and comes from Brasserie Dubuisson Frères.  This beer was made for the 75th anniversary of Bush.

Here is a list of beers we sampled at Brugs Beertje:

Guido -a Belgian Strong Dark Ale of 8.0%abv which is no longer being brewed by Brouwerij Smisje. Filip, in addition to keeping up the Belgian Beer Board, also contributes to the Smisje website.

Smiske is a Belgian Pale Ale of 7.0% abv and is brewed by Brouwerij Smisje.

Triple d’Anvers – an  8.0% abv Tripel which is a new brew from Brouwerij De Koninck (which is now owned by Duvel Moortgat).

And we all ended the night with the 2010 St. Bernardus Christmas Ale, which is a Belgian Strong Dark Ale of 10.0% abv brewed by Brouwerij St. Bernardus NV.

Stay tuned for Days 2 through 7 as we Barge through Belgium using the canals to go to Gent, Antwerp and Brussels.