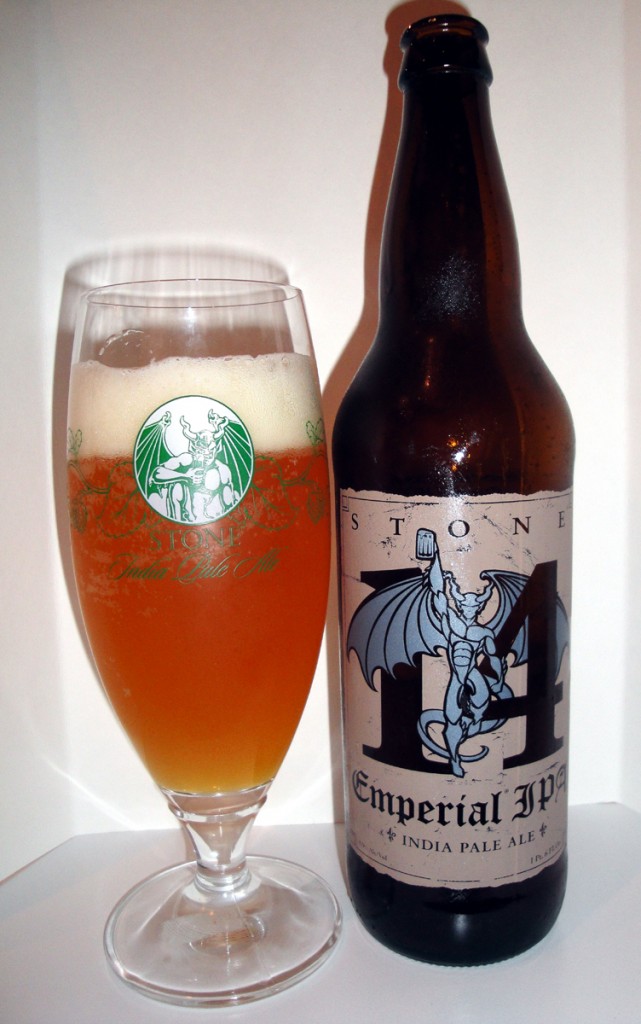 I paired this beer with: Nothing

Note: This beer poured as a hazy straw color with a fluffy 2 finger off white head.   The nose was more citrusy, with grapefruit rinds, then piney.  The taste started off sweeter than expected with caramel malts and then I got the citrus flavors of the hops.  The mouthfeel was a medium to heavy body with a “thickness’ not found in most IPA’s and a nice level of carbonation. The drinkability was fairly good for a 8.9% abv brew.  This is not the best beer I’ve had from Stone, but is one which I would like to have again.

On the Label:  June 2010. CONSUME FRESH or age in the hull of a seafaring vessel for a year or more.

We went to England this past spring as self-styled “IPA Hunters” on a mission to learn more about the confusing and often contradictory history of India Pale Ale – to look for some certainty where those before us have found mostly mystery and mercantilism. While our success in this pursuit is open to debate, there can be no question that we returned home inspired by the ghosts of Burton and by the experience of poring over 150-year old brewer’s logs handwritten in (India?) ink. Stone Brewing Co., after all, traces its lineage back to the British Empire’s brewing history: we make ales, and all of our original offerings used traditional British styles as a jumping-off point. If this seems a roundabout way of letting you know that, yes, we are in fact brewing another IPA to mark our Anniversary, well, so be it.

This one however, promises to be different! From the imported white malt to the “Burtonised” water to the rare yeast strain to the most pungent hops Kent has to offer, we used all British ingredients to brew our “Emperial” IPA.* While we may have brewed Stone 14th Anniversary Emperial IPA with our own distinctively modern, San Diego-style touch, what good is history if you can’t rewrite it to suit your tastes?

In this case, our tastes called for highly intemperate quantities of Target, East Kent Goldings, and Boadicea hops, bestowing upon this dry-bodied ale a powerfully spicy, earthy aroma. On the palate, peppery hops assert themselves early and often, with malt sweetness making a brief appearance before being beaten back by a long, complex, and decisively bitter finish. What better way to contemplate the fate of empires past, present, and future?

Um, except for our filtered Colorado River water, of course.